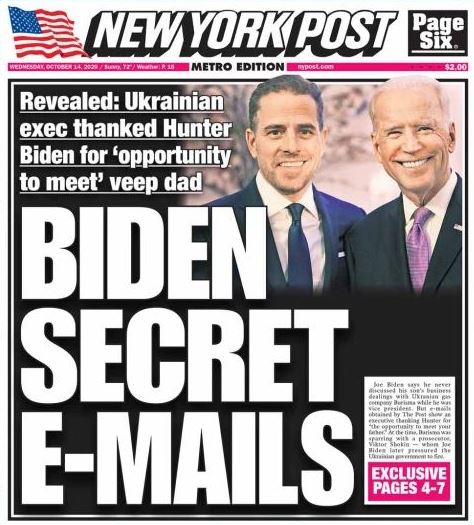 Background/Context:  Joe Biden has denied he had knowledge of his son Hunter Biden’s dealing with Ukrainian energy firm Burisma who paid Hunter in excess of $83,000 month – though Hunter had no energy experience, no Ukraine experience he doesn’t even speak Ukrainian. Joe Biden’s denials appears to be a clear attempt to preempt any questions of impropriety with his son Hunter. Selling access to the then vice president and to U.S. Foreign policy is of course both immoral and illegal. According to the author of a related censored story, the article from the Post lists evidence (which was obtained from a laptop abandoned by Hunter at a repair shop) of dealings with at least one Burisma high official who had a meeting with the then Vice President. Since this charge relates to illegal activity, this is a much more serious issue than the legitimate call that President Trump made to a Ukrainian official that was used as a pretext for impeachment. This action by Biden, if true, is disqualifying for the presidency. If widely known, people would likely come to that conclusion and respond appropriately in the upcoming election, destroying Biden’s chance at election. In recognition of that fact, in an apparent attempt to keep Biden’s image untarnished, and to squelch the story, Big tech social media companies (Facebook, Twitter, Google) have been accused of trying to hide this story, and thus effectively censor, the story.

True or False: True. Big Tech (and the main stream media) are censoring this story in particular, and conservative stories and views in general.

Reasons:
1. The New York Post, a well known respected news establishment,  was unable to tweet a link to their own story. They were effectively banned (see below)

3. Twitter is shadow banning links to the story that are posted (see below)
(Shadow Banning is when Twitter prevents others from seeing posts you’ve made, but the posts remain visible to the account posting it, so it’s not immediately
apparent that the post has been banned. A sample of that is shown below where the tweet with the “offending link” is visible from the account posting it, but
not visible to others looking at that account.)

4. There are numerous reports of Facebook and Google likewise working to stop the spread of the story. (see below)

Related:
Voters have right to know what Joe Biden did for son Hunter:  Miranda Devine, 10/14/20

It has been common knowledge that the social media giants (Facebook, Twitter, Google (which owns YouTube)) have been censoring conservatives and even the president on their platforms which are supposed to be open for public use. They’ve also been hiding and shadow banning material from conservatives, and blocking stories negative toward democrats and the left. It is well summed up in this tweet:

Point by point Echoes and references: 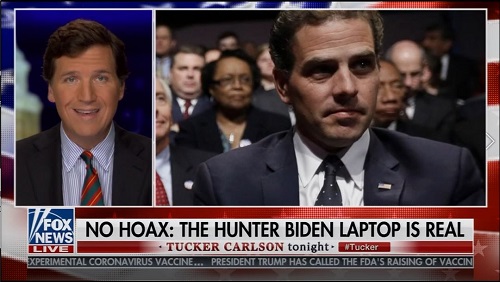 Some have claimed that the Hunter-Biden-selling-Joe-Biden-influence story is just conjecture. The author of one of the stories, Miranda Devine, refutes that claim by detailing the physical evidence they have in hand.

Concluding Comments:
The claim that big tech is censoring the Biden laptop story is true. The censorship is against president Trump and benefiting Joe Biden and is overwhelmingly clear. There is a strong attempt to hide this story among tech giants Twitter and Facebook in particular, and the left leaning media in general. There is a clear attempt by these big tech companies to influence the election – in a manner they claim the Russians tried.  Tucker Carlson likened it to the censorship that communist China uses. Others called this an in kind contribution to the Biden campaign by the Big Tech companies. Either way, it is clear that the U.S. no longer has a neutral press corp doing valid journalism and presenting the results to the public. Instead what we have is a main stream media that functions as the propaganda arm of a communist regime – allowing only what they want the people to see.

Chronicles Of the End of America

Covid Vaccines, Treatments and more.
What the Government is hiding.

History’s Verdict: The 2020 Election was stolen

Fact check: Was the Election Stolen?